The Gigaschools Video Competition challenges students to create a video showing what they think learning will be like in the connected schools in Gigatown. John McGlashan College, led by myself won first prize national for the secondary school category, gaining Dunedin 300,000 gigapoints, and over $7,000 worth of prizes for the school. Dunedin later became New Zealand’s Gigatown – the first city in the southern hemisphere to have a Gigabit internet connection.

A team of year 12 and 13 pupils from John McGlashan college won Chorus’ Gigaschool video competition by showing how “handy” it would be if the school had gigabit-speed internet.

The video showed senior pupils talking about the benefits  high speed internet would have for the school in a mock professional presentation style.

The performance included various jokes and puns, including two pupils high-fiving while describing access to better internet as “handy”.

The video won the senior category of the competition, netting the school 10 digital cameras and $2500 to go towards technology.

A SATIRICAL video about the benefits of ultrafast broadband and gigabit services in the classroom has won John McGlashan College top prize in the national Gigaschools Video Competition.

A large group of pupils spent a month and a-half shooting and editing the video, which is an amusing account, part parody, of the impact on future schooling that access to increased internet speed and sophisticated digital tools has in the classroom.

Principal Neil Garry said the school was proud of the achievement.

“They’ve spent a long time working on this, using quite a lot of intricate equipment and technical knowledge”.

Director Koon Chakhatrakan (16, far left) is joined by cast members (from left), fellow John McGlashan College pupil Callum van Dyk (16), and Ihlara McIndoe (15) and Mhairi Rowbottom (15), both of St Hilda’s Collegiate School, on the first day of shooting for a debut feature film at the weekend. 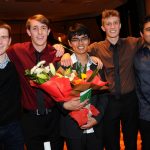